This past weekend Jules and I were in Tampa for a marriage conference, and during the conference there was an opportunity for us to go on a “date night”. We were both looking forward to it, so we went to Channelside… a spot in Tampa with several restaurants, a movie theater, and kind of a party atmosphere. So, we went down there for a little dinner and decided to catch a movie, and it was awesome being with my beautiful wife, talking about things, and just sharing each other’s company.

But there was something that both of us found very, very unsettling… All around Channelside were these girls dressed WAY too provocatively in short black dresses… and by short I mean they would be considered long-shirts by most people’s standards… and by girls I mean some may have been 12 or 13 years-old. And as you might expect where there are girls dressed that way there are drooling, sweaty boys following far too closely. It was sad to see the looks on these kids’ faces. So unsure. So nervous. But trying to hide it with false bravado and posturing. All of them sure desperate to find significance by looking and acting just like everyone else. I felt depressed, and old.

I know there were probably times in my early adolescents where I put out the same sort of false security in my black shirt, or having the right shoes, or because I was just like everyone else and yet spouting off things about wanting to be different. But now I see just how foolish that was. 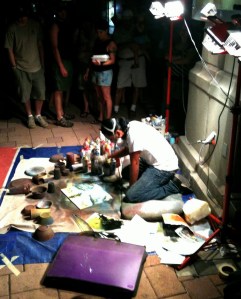 Something else was going on at Channelside that night which stood out in such a sharp contrast to all that was going on around as to seem like a small but brilliant gem in an otherwise rocky environment. There, in the very middle of the plaza, was an artist who had set himself up a little street studio. Right there on small 18″x18″ canvases he dreamed and created beautiful landscapes which he only saw in his own mind. Some were of beaches and mountains, others were landscapes that only George Lucas might fully understand. This artist dreamed with spray paint and a pillow under his knees and as the crowds watched him he could not have cared less if anyone else like what he did, because after each world was created he put it out front and looked up smiling. What he had created was good.

In Genesis, we read that God created men and women, male and female, he created them in HIS image and that he breathed into them the breath of life (ruach in the Hebrew also meaning spirit as used in Genesis 1:2), and you know I have never really had a problem with that, until I really think about it. It means that something in each and every person that has ever lived or will ever live reflects something of the glory of God… something in every single human being has the Spirit of God in them. Now, that’s easy for me to accept when I think of the people I know… my friends, my family. And it’s easy for me to see that worked out when I think of that artist creating worlds on canvas, but what about those kids? I admit it’s difficult. What about convicts in the local jail? What about terrorists in the Middle East? For me, it’s downright impossible to comprehend that God made them at all.

So, what does that tell me? It tells me something strange about how I am supposed to respond to situations with other people. It tells me that as God looks on all people and sees the effect that sin has had on the image he has put in us, it must break his heart. Thus the need for a Savior. See Jesus though he was in the form of God, did not count equality with God a thing to be grasped, but made himself nothing, taking the form of a servant, being born in the likeness of men. And being found in human form, he humbled himself by becoming obedient to the point of death, even death on a cross. (Philippians 2:6-8). He was the perfect image of God, without sin, without corruption, and yet he gave that up so that through him we, and those kids at Channelside, and the artist, might be covered with Christ’s perfection and restore the image of God that has been corrupted by our sin.

It also tells me something else… I am no better than those kids. I still feel lost at times… broken, full of self-doubt, looking around nervously for acceptance. But I know that my worth is not dependent on even my own feelings of worth. It is entirely dependent on my acceptance by God which I can not earn or add to. God has already accepted me because of the life, and ministry, the death and resurrection of Jesus Christ. And that is something everyone needs to hear.